Microsoft Office 2010 was released on May 11 and it is already having impact on productivity.  Office 2010 has spent more time in beta testing than previously released versions.  The extended beta testing resulted in a well polished product with useful and impactful enhancements.

What has changed in Office 2010?
The enhancements in Office 2010 make it a compelling product for small organizations.  Microsoft has embraced collaboration, graphics and new media, mobile employees, and better leverage of the Internet.  The net result is a product that will help users and teams work more efficiently to produce higher quality and more visually appealing documents. 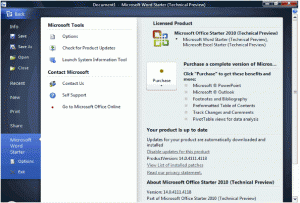 Express Ideas Visually
Easily create powerful visuals and apply professional-looking designs to photos and text, and videos in PowerPoint.  New and improved picture-editing effects and video editing and formatting capabilities can be found across the products in the productivity suite.

Connect, share and accomplish more when working together.
Get more done when working in groups.  A new co-authoring feature in Word, PowerPoint, and OneNote lets you work on a file with multiple people from different locations.

Create powerful data insights and visualizations
In Excel 2010 you can easily track and highlight important data trends with new data analysis and visualizations.  The new Sparklines feature delivers a clear and compact visual representation of your data with small charts in a cell.  A new Slicer feature lets you filter and segment PivotTable data in multiple layers so more time can be spent analyzing and less time formatting.

Deliver more compelling presentations
PowerPoint 2010 allows you to effectively engage your audience by embedding and personalizing videos within your presentation.  Flexible video editing capabilities are built into PowerPoint so that your videos can be customized without having to leave the application.

Ribbon
The Ribbon found in some of the Office 2007 applications can now be found across all applications of Office 2010.  New to Office 2010 is the ability to customize the Ribbon for your needs, allowing you to group your favorite commands in new tabs.

SharePoint Integration
Many of the new features that can be found within the Office 2010 office suite are only available in environments where SharePoint 2010 is installed.

Co-author your documents using SharePoint 2010 together with Word, Excel, PowerPoint and OneNote.

Use SharePoint 2010 to access your Office Web Apps with Word, Excel, PowerPoint and OneNote, and access business forms with InfoPath 2010.